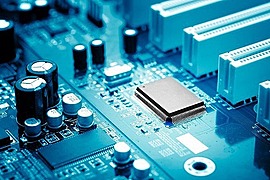 Moore's Law refers to Gordon Moore's view that the number of transistors on a microchip doubles every two years, though the cost of computers is cut in half. Claiming that growth is exponential, it states that we can expect the speed and capacity of our computers to increase every couple of years, and we will pay less for them. Moore's Law has led the semiconductor industry in long-term planning and setting targets for research and development. It has been a driving force of technological and social change, productivity, and economic growth that are hallmarks of the late-20th and early 21st centuries.