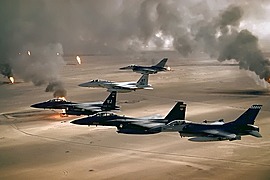 The Persion Gulf War of 1990 - 1991, also known as the Gulf war, consists of a series of conflicts involving Iraq and the United States that led to coalitions in the late 20th century. The Gulf War was an armed conflict between Iraq and a coalition of 39 nations including the United States, Britain, Egypt, France, and Saudi Arabia. First started when the Iraqi president Saddam Hussein declared that the invasion was a response to overproduction of oil in Kuwait, the United States then led a coalition that began a massive air war to destroy Iraq's forces and military and civil infrastructure. With the US's air offensive known as Operation Desert Storm, the Persian Gulf War was initially considered as an unqualified success for international coalition, it seethed conflict in the troubled region led to a second Gulf War–known as the Iraq War–that began in 2003.