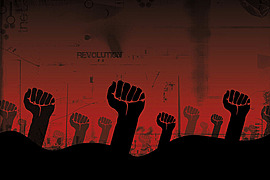 A Revolution refers to a movement, often violent in nature, to overthrow an old regime and effect complete change in the fundamental institutions of the society. With a relative change in political power and organization, typically due to perceived political, social, or economic oppression, these revolutions result in major changes in the culture, economy and socio-political institutions. Revolutions are often fueled with economic or fiscal strain, alienation and opposition among the elites, widespread popular anger at injustice, a persuasive shared narrative of resistance, and favorable international relations. Revolutions have both structural and transient causes; with long-term and large-scale trends, and contingent events that reveal impact of longer term trends.