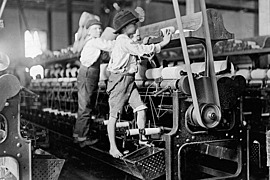 The Industrial Revolution marked a period of development that transformed largely rural, agrarian societies in Europe and America into industrialized, urban ones. A period fueled by game-changing use of steam power, the Industrial Revolution began in Britain, spreading to the rest of the world, this includes transcontinental railroad, cotton gin, electricity and other inventions permanently changed society. With technological, socioeconomic, and cultural advancements, many developments took place including the use of energy resources, a new organization of work known as the factory system, and other major developments in the non-industrial spheres. This revolution also brought economic changes that resulted in a wider distribution of wealth, political changes, and confidence in the ability to use resources were heightened.