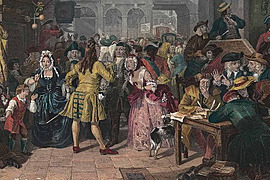 The South Sea Bubble was an 18th century speculative bubble involving the shares of the South Sea Company, a British international trading firm that was granted a monopoly in trade with Spain’s colonies in South America and the West Indies. In exchange for these exclusive trading rights, the company bore England’s war debt. When investors recognized the potential profits to be made from trade with the gold and silver-rich South American colonies, they bid the South Sea Company’s shares to incredible heights in a common speculative bubble fashion. Not long after substantially all classes of British society were fully engaged in wild stock speculation, the South Sea Bubble popped and stock prices violently collapsed, financially spoiling their investors.