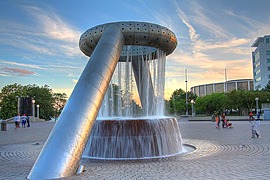 Detroit City is dubbed as the Motor City as it boasts muscle cars, techno music, with culture capital, foodie magnets, and trendsetters. Historically associated with industry and automobiles, Detroit has a diversified manufacturing and shipping base, sensitive to the fortunes of the automotive industry. The city is also regarded as one the major cultural centers for its contributions to music, art, architecture and design. Detroit has captured worldwide attention with its rich musical and industrial heritage, with expanding museums, performing arts, events, and international cuisine, with its theater district known as the second-largest in the country.