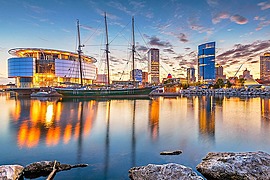 The Midwest, also known as the Midwestern United States, is the region of the USA known as “America’s Heartland”. It is composed of two regions, the Northwest Territory, and the Great Plains, becoming an area of immense diversity. This region has continued to be the most important economic region in the country, leading all other sections in value added by manufacture and in total value of farm marketing, with its primary role in the nation’s manufacturing and farming sectors, and a chunk of commercial cities and small towns. The culture of the Midwest is generally acknowledged to be "down to earth", with Midwest cities involving Chicago, Cincinnati, Cleveland, Detroit, Indianapolis, Kansas City, Milwaukee, St. Louis, Minneapolis, and St. Paul. The Midwest states include Illinois, Indiana, Iowa, Kansas, Michigan, Minnesota, Missouri, Nebraska, North Dakota, Ohio, South Dakota, and Wisconsin.