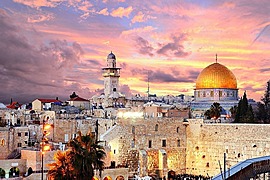 Israel is the 100th smallest country in the world, but the largest immigrant-absorbing nation with a population of over 8.6 million people. One of the only three democracies in the world without a codified constitution, and the only liberal democracy in the Middle East, Israel has become an industrialized country based on intensive and sophisticated research and development. Israel is known for the highest life expectancy in the world at 82 years, and the country is also known for being the home of the largest number of museums in the world, including the world’s only museum underwater. Israel’s economy thrives in hi-tech industry, diamond industry, agriculture, construction, transport and communications, and tourism. Israel’s most-visited tourist attractions include Jerusalem, Haifa, Nazareth, Acre’s Old City, Baha’i Gardens, and The Church of the Holy Sepulchre and Via Dolorosa.

Ben-Gurion University of the Negev

The Hebrew University of Jerusalem