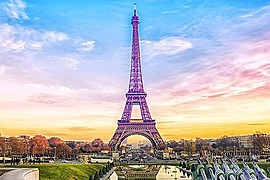 Paris, popularly known as the City of Love and the City of Lights, is the capital and most populous city in France, with a population of over 2.1 million people. Ranked as the second most visited travel destination in the world in 2019, the city has an annual 30 million foreign visitors, making it one of the most visited cities in the world. The City of Lights has been one of Europe’s major centres of finance, architecture, culture, diplomacy, commerce, fashion, science and arts. One of the most beautiful cities in the world, Paris is especially known for its historical museums and architectural landmarks including the Sacré-Coeur Basilica, the Notre Dame, Bastille, the Grand Palais and Petit Palais, the Eiffel tower, known as the Iron Lady, and the Louvre Museum, the world’s most popular and visited museum. The city is also a major railway, highway, and air-transport hub served by two international airports: Paris–Charles de Gaulle and Paris-Orly. Paris’s nightlife is also rich with famous cabarets such as the Moulin Rouge, Lido and the Crazy Horse.

The American University of Paris