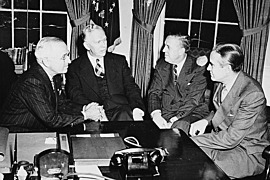 The Marshall Plan, also known as the European Recovery Program, was proposed by Secretary of State George C. Marshall, which constitutes as a US-sponsored program designed to rehabilitate the economies of 17 western and southern European countries in order to create stable conditions in which democratic institutions could survive. It provided more than $15 billion to help finance rebuilding efforts on the continent that reconstructed cities, industries and infrastructures that were heavily damaged by World War II. It aimed to remove trade barriers between European neighbors, as well as foster commerce between those countries and the United States, resulting in great economic recovery, and economic prosperity. The Marshall Plan has also been a key catalyst for the formation of the North Atlantic Treaty Organization (NATO), and cited as the beginning of the Cold War between the United States and its European allies and the Soviet Union.