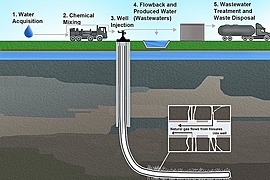 Hydraulic Fracturing, or Fracking, is a small method of the broader process of unconventional development of oil and natural gas. A proven drilling technology that has been safely used in the United States since 1947, Fracking has been used for extracting oil, natural gas, geothermal energy, or water from deep underground. Similarly, hydraulic fracturing involves the process of injecting liquid and materials at high pressure to create small fractures within tight shale formations to stimulate the production and safely extract energy from an underground well after the drilling has ended and the rig and derrick are removed from the site. Fracking was the key driver in pushing the U.S. to again become the largest oil producing country in the world over the last decade.