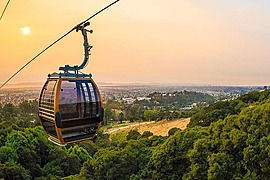 Oakland, also known as The Town, is a charter city recognized as the 45th most populous city in the United States with a population of over 430,000 people. An urban cultural mecca, Oakland is the most ethnically diverse city in the country, with 125 different dialects and languages spoken. The Town serves as a trade center for the San Francisco Bay Area, another major port city with a rich history, with thriving economy and world-class cultural attractions. With more than 80 parks, Oakland is also a major center of commerce and industry, home to some Fortune 500 companies. Oaklanders are also passionate about their sports, supporting three major league teams. Oakland is the only city in the world to have a natural saltwater lake within its city limits, known as Lake Merritt.