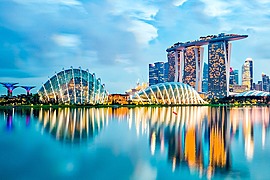 Beyond Singapore’s flawless skyline and bustling city center, there’s so much about this country to explore. This cosmopolitan city is one of the world’s greenest cities. Nearly half of Singapore’s land area is filled with lush greenery. It is also known for pioneering the first F1 night race. Held annually since 2008, Grand Prix Season Singapore features a gamut of concerts, racing and entertainment activities, for Formula One fans and visitors of all ages.