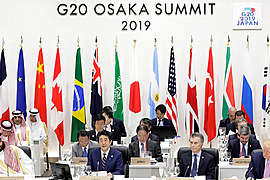 The G20 Summit is an annual Group of 20 Summit meetings consisting of a group of finance ministers and central bank governors of the world’s largest economies, including those of many emerging nations. With a mandate to promote global economic growth, international trade, and regulation of financial markets, this annual summit also tackles international economics and financial stability, with its latest meeting including cryptocurrency, food security, and trade wars. One of the group’s most impressive achievements was its robust response to the 2008 financial crisis. The G-20 members include the G-7 nations—Canada, France, Germany, Italy, Japan, the United Kingdom, and the United States—and 11 emerging market and smaller industrialized countries—Argentina, Australia, Brazil, China, India, Indonesia, Mexico, Russia, Saudi Arabia, South Africa, South Korea, and Turkey. The EU is also a member of the G-20.