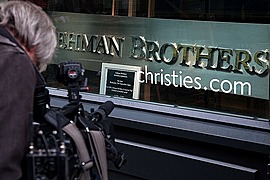 The Collapse of the Lehman Brothers dated back to September 2008, contributing to the 2008 Financial Recession. The bank and financial services firm had become involved in mortgage origination, making it a real estate hedge fund posing as an investment bank. With its over-leveraging and unwieldy venture into subprime lending, Lehman Brothers became the catalyst of the 2008 economic disaster and beyond, triggering the collapse of the banking and housing industries. Lehman Brothers’ downfall was the fourth-largest US investment bank collapse, with $639 billion in assets and $619 billion in debt. Lehman’s bankruptcy has affected over 25,000 employees worldwide, with its bankruptcy filing considered as the largest in history, as its assets far surpassed those of previous bankrupt giants such as WorldCom and Enron. Lehman’s demise also made it the largest victim of the US subprime mortgage-induced financial crisis, proving that even the most successful and enormous businesses one year can be bankrupt the next.