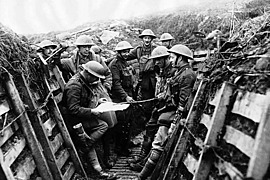 World War I, also known as the Great War, is an international conflict with over 30 nations declaring war between 1914 and 1918. What began as a relatively small conflict in southeast Europe became a global war between the Allies and the Central Powers, over 65 million men volunteered or were enlisted to fight in mass citizen armies. The war altered the world’s social and political landscape, ending with the defeat of the Central Powers, leaving an estimated 16 million soldiers and civilians dead and countless others physically and psychologically wounded. World War I has also been referred to as “the first modern war”, with many of the technologies associated with military conflict including machine guns, tanks, aerial combat and radio communications, widely considered virtually unprecedented in the slaughter, carnage, and destruction it caused.