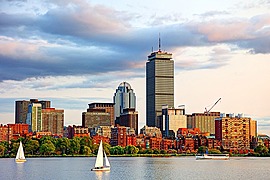 Massachusetts, also known as the Bay State, is a New England state and one of the original 13 colonies. It is the most populous state in the New England region, and its capital is Boston, which is also the most populous city in the state. Massachusetts not just played an important role in US history, but the sports history as well. The state is known for its colonial landmarks, scenic landscapes, and picturesque villages; it's also home to Harvard University and the Boston Red Sox. Massachusetts’s economy shifted from manufacturing to services, turning into a global leader in biotechnology, engineering, higher education, finance, and maritime trade. In May 2004, Massachusetts became the first state in the nation to legalize same-sex marriage.